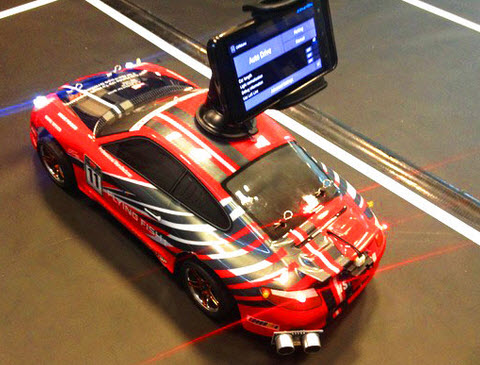 Dimitri Platis is a software engineer who’s been working with his team on an Android-based self-driving vehicle which uses machine vision algorithms and techniques as well as data from the on-board sensors, in order to follow street lanes, perform parking manoeuvres and overtake obstacles blocking its path:

The innovational aspect of this project, is first and foremost the use of an Android phone as the unit which realizes the image processing and decision making. It is responsible for wirelessly transmitting instructions to an Arduino Mega, that controls the physical aspects of the vehicle. Secondly, the various hardware components (i.e. sensors, motors etc) are programmatically handled in an object oriented way, using a custom made Arduino library, which enables developers without background in embedded systems to trivially accomplish their tasks, not caring about lower level implementation details.

On the software dimension of the physical layer, an Arduino library was created (based on a previous work of mine [1], [2]) which encapsulated the usage of the various sensors and permits us to handle them in an object oriented manner. The API, sports a high abstraction level, targeting primarily novice users who “just want to get the job done”. The components exposed, should however also be enough for more intricate user goals. The library is not yet 100% ready to be deployed out of the box in different hardware platforms, as it was built for an in house system after all, however with minor modifications that should not be a difficult task. This library was developed to be used with the following components in mind: an ESC, a servo motor for steering, HC-SR04 ultrasonic distance sensors, SHARP GP2D120 infrared distance sensors, an L3G4200D gyroscope, a speed encoder, a Razor IMU. Finally, you can find the sketch running on the actual vehicle here. Keep in mind that all decision making is done in the mobile device, therefore the microcontroller’s responsibility is just to fetch commands, encoded as Netstrings and execute them, while fetching sensor data and transmitting them.

Here’s the essential bill of materials: